‘PEPPOL’ (Pan-European Public Procurement On-Line) has been growing in popularity over the last few years.

It seems that sending invoices electronically is slowly becoming a worldwide legal obligation. And, with Covid-19 forcing workers to stay at home in 2020, many companies have already switched to e-invoicing. Because e-invoicing has made physical contact between people — spreading germs, etc — less important.

Furthermore, the many benefits of e-invoicing (saving time, money, and resources) mean that PEPPOL is constantly growing in relevance.

If you want some simple explanations about what PEPPOL is, what it does, and how it can help your business, then read on!

6. How does PEPPOL work?

9. The Advantages of PEPPOL

10. The Disadvantages of PEPPOL

12. Who can I send e-invoices to with PEPPOL?

13. Can I receive e-invoices with PEPPOL?

14. Can PEPPOL be used worldwide?

15. The Future of PEPPOL

16. How do I join the PEPPOL Network?

PEPPOL is a network for the exchange of electronic invoices and documents online.

The reason PEPPOL was developed was to help simplify the process of billing and invoicing between governments and businesses – especially internationally.

PEPPOL also provides a much more secure exchange platform when compared with emails or other methods. Because all of PEPPOL’s participating members must be legitimate organisations.

(Also, the platform itself ensures that all documents sent through it are virus-free and safe from hackers, etc.)

What is the PEPPOL Network?

The PEPPOL Network is the web that connects all the participating PEPPOL members together.

In the same way that the internet is a “web” to connect all websites, the PEPPOL network connects all of its members. Public authorities, businesses, entrepreneurs — if they are members of the PEPPOL Network, they can safely send and receive documents to and from each other.

A PEPPOL Access Point is a service provider who is certified to give companies or public authorities access to the PEPPOL network.

Some companies and government bodies set up their own, private PEPPOL Access points.

What is Open PEPPOL?

Open PEPPOL is an international association of PEPPOL Network members.

Invoice-Portal is one such member of Open PEPPOL. And you can claim certified access to the PEPPOL Network through our software free of charge.

If you wish to become a member of Open PEPPOL, you can contact PEPPOL directly via email: info@peppol.eu

What is a PEPPOL ID?

A PEPPOL ID is the unique identification of each organisation connected to the PEPPOL network.

A good comparison to make would be to somebody’s phone number.

In the mobile network, your phone number is how people can identify and send you messages. In the PEPPOL Network, an organisation’s PEPPOL ID is what you would use to send documents to the organisation you need to.

All members of the PEPPOL network have a PEPPOL ID, and it is not possible to participate in the network without one.

How Does PEPPOL work?

The PEPPOL Network can be explained with an extremely simple model: The Four Corner Model: 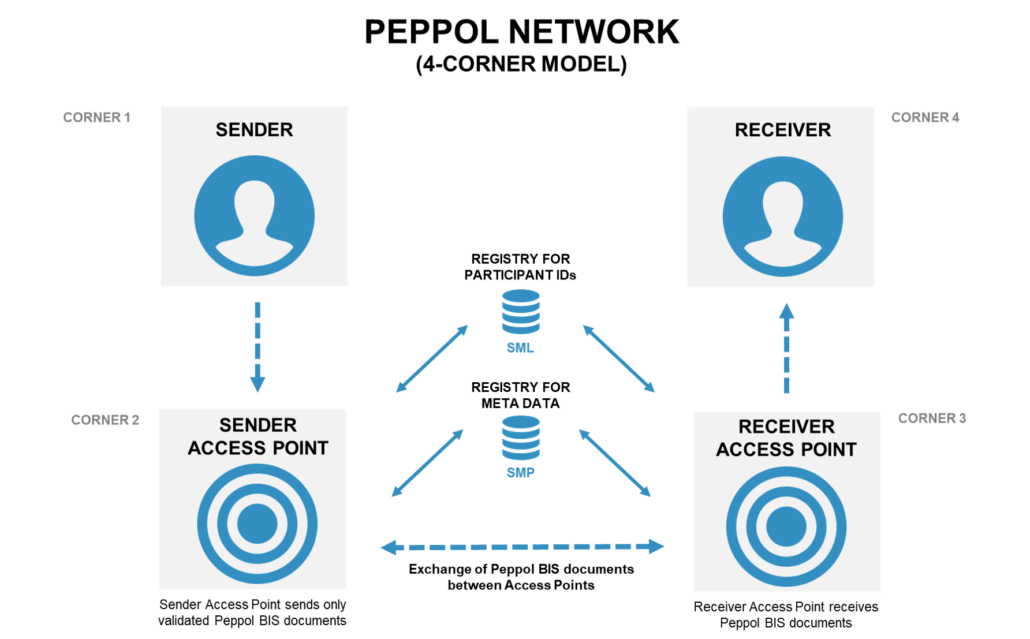 It couldn’t be much simpler.

And the PEPPOL Network uses high-level technologies that are secure from hackers and other potentially problematic digital pests.

As a result, the PEPPOL Network provides a better service than manually sending e-invoices to clients via email or by a basic CRM (Customer Resource Management) system.

What Is PEPPOL BIS?

PEPPOL BIS is the overarching invoicing standard that organisations must comply to.

If organisations do not comply to this standard, then they will not be able to send or receive documents through the PEPPOL Network.

The reason such standards are so important are as a result of the E.U’s ‘ Directive 2014/55/EU’, which made it a legal obligation for companies sending invoices to governmental bodies to do so in compliance with a particular standard – a standard called ‘EN-16931’.

PEPPOL BIS is a standard that complies with the EN-16931 standard.

And, due to the practical strengths of PEPPOL, many countries have created their own e-invoices to be compliant with PEPPOL BIS and (on the deeper level) the EN-16931 standard.

Other examples of invoicing standards compliant with this include XRechnung and ZUGFeRD.

Singapore, New Zealand, and Australia have all created PEPPOL frameworks unique to their countries (and their unique taxing systems, etc).

Rumour has it that Canada and the United States are also in the process of creating PEPPOL frameworks.

Therefore, it seems quite likely that the PEPPOL network is going to boom in popularity in the coming years.

PEPPOL is already accepted throughout Europe as a legally-compliant standard that provides a secure platform for the exchange of invoices.

And its influence is spreading beyond Europe. Therefore, PEPPOL is clearly becoming a significant player in the e-invoicing world.

Moreover, many organisations are now making it an obligation for invoices to be sent to them through PEPPOL – and this is becoming the case more and more as time goes on.

If you are a company or public authority that has to send e-invoices compliant with specific standards, then the chances are very high that joining the PEPPOL network would be of huge benefit to you.

Using PEPPOL enables you to:

Save time and money by having e-invoices processed automatically, thanks to the common standard shared between you, your clients, and/or your recipients (this includes getting paid faster).

Send and receive e-invoices securely, through a network that ensures your invoices get to where you want them to go without disturbance

What Are The Advantages of PEPPOL?

What Are The Disdvantages of PEPPOL?

According to peppol.eu, there are PEPPOL members in 39 countries throughout the world – 31 European countries plus Australia, Canada, China, Japan, Mexico, New Zealand, Singapore, and USA.

Furthermore, the United Kingdom’s National Health Service (the NHS) made invoicing through PEPPOL the standard for their own procedures.

Throughout these 39 countries and beyond, there are more than 2 million organisations signed up to the PEPPOL network.

To find out if your client is part of the PEPPOL network, you can use our PEPPOL ID checker.

Who can I send e-invoices to with PEPPOL?

Simply put, you can send e-invoices to anybody who is a member of the PEPPOL network.

As mentioned previously, there are more than 2 million member organisations in PEPPOL throughout 39 countries.

Again, if you want to know whether or not your client is part of the PEPPOL network, you can use our PEPPOL ID checker here.

Can I receive e-invoices with PEPPOL?

Of course you can. You can both send and receive e-invoices using PEPPOL.

Can PEPPOL be used worldwide?

As long as members use document standards that are compliant with PEPPOL BIS, then anybody – from anywhere in the world – can use PEPPOL.

However, many countries are not using e-invoicing standards that are compliant with PEPPOL BIS, so if you are processing e-invoicing in such countries then the use of PEPPOL is probably not appropriate for your business.

The Future of PEPPOL

Nobody can say for sure what the future holds for e-invoicing.

But the trends are clear. More and more countries are implementing legislation that makes e-invoicing standards an obligation – and the PEPPOL BIS standard is setting a wonderful example for such legislation.

But it would be far much great of a leap to suggest that PEPPOL will one day become a global standard for invoicing. After all, South American countries seem to have zero interest in implementing such legislations (for the time being).

However, more than 130 million invoices were processed through Peppol Access Points in the tax year 2019/2020 – a huge number!

It seems likely that the number will only grow in future because more and more countries standardise their e-invoicing processes to the PEPPOL format.

The future is uncertain, as ever. But PEPPOL appears well placed to play a significant part in the future of e-invoicing.

How do I join the PEPPOL Network?

You have two options:

Becoming a PEPPOL Access Point is a fairly long process and most businesses don’t have time to run such operations.

But if you process a significantly high number of e-invoices, then it might be worthwhile for you to set one up yourself.

This is the fastest, and easiest option.

There are businesses dedicated to providing PEPPOL services, including access to the PEPPOL Network.

For example, Invoice-Portal is a certified PEPPOL Access Point and offers some PEPPOL access (and other services) free of charge:

You can find out more about which cookies we are using or switch them off in settings.

This website uses cookies so that we can provide you with the best user experience possible. Cookie information is stored in your browser and performs functions such as recognising you when you return to our website and helping our team to understand which sections of the website you find most interesting and useful.

Strictly Necessary Cookie should be enabled at all times so that we can save your preferences for cookie settings.

If you disable this cookie, we will not be able to save your preferences. This means that every time you visit this website you will need to enable or disable cookies again.